This belongs in a museum.

In 1975 or 1976 I got this OSI 300 Computer Trainer.  This has a 6502 processor, and a single 6810 static RAM chip with a stunning 128 bytes of memory !  You programmed it by setting the address switch to an address, setting the data switches, loading that into memory.  Then you incremented the address and loaded the next data.  When you were done, you put RESET high, then RUN high, then RESET low, and if everything was perfect, your program would run.

The OSI 300 used cheap slide switches, and I soon wore them out.
Hence I did surgery on the OSI 300 and mounted the board in a nice cabinet, with much better toggle switches.   Inside the case is a nice power supply, as well as a speaker.

By clever use of code loops that increment while toggling the speaker on and off, you can get interesting sound sequences.

Included is a nicely bound copy of the original manual, in excellent condition, it says it is for the OSI 300 "Model III".   On the cover of the manual you can see a program I wrote that generates an interesting audio sequence.   Also included are several other programs and flowcharts I did.

I had not run this computer in decades, BUT IT STILL WORKS !   Initially some of the switches didn't seem to be reliably making contact etc., but within minutes they became again quite reliable.

Here is a link to an .mp3 of the sound sequence that the program on the cover makes.

The audio level is quite low, but you can hear it.  It would be louder if I had some holes in the case.
However, there is also a small cable with an RCA jack that comes out the back that you can hook up to an amplifier if you want it louder.

Google on "Ohio Scientific 300 manual" as the manual is out there as a .pdf.  It really is a complete course on 6502 machine code, and so many of its concepts are still in play today.

This item is 40 years or so old, so that must be taken into consideration.    The included internal power supply is nice, but it is unfused and the unit is not UL-approved, but it looks OK inside and should not give you any trouble, but given the age I can not guarantee it will continue to operate without issues.

But as I was delighted to see (and hear), it STILL WORKS ! 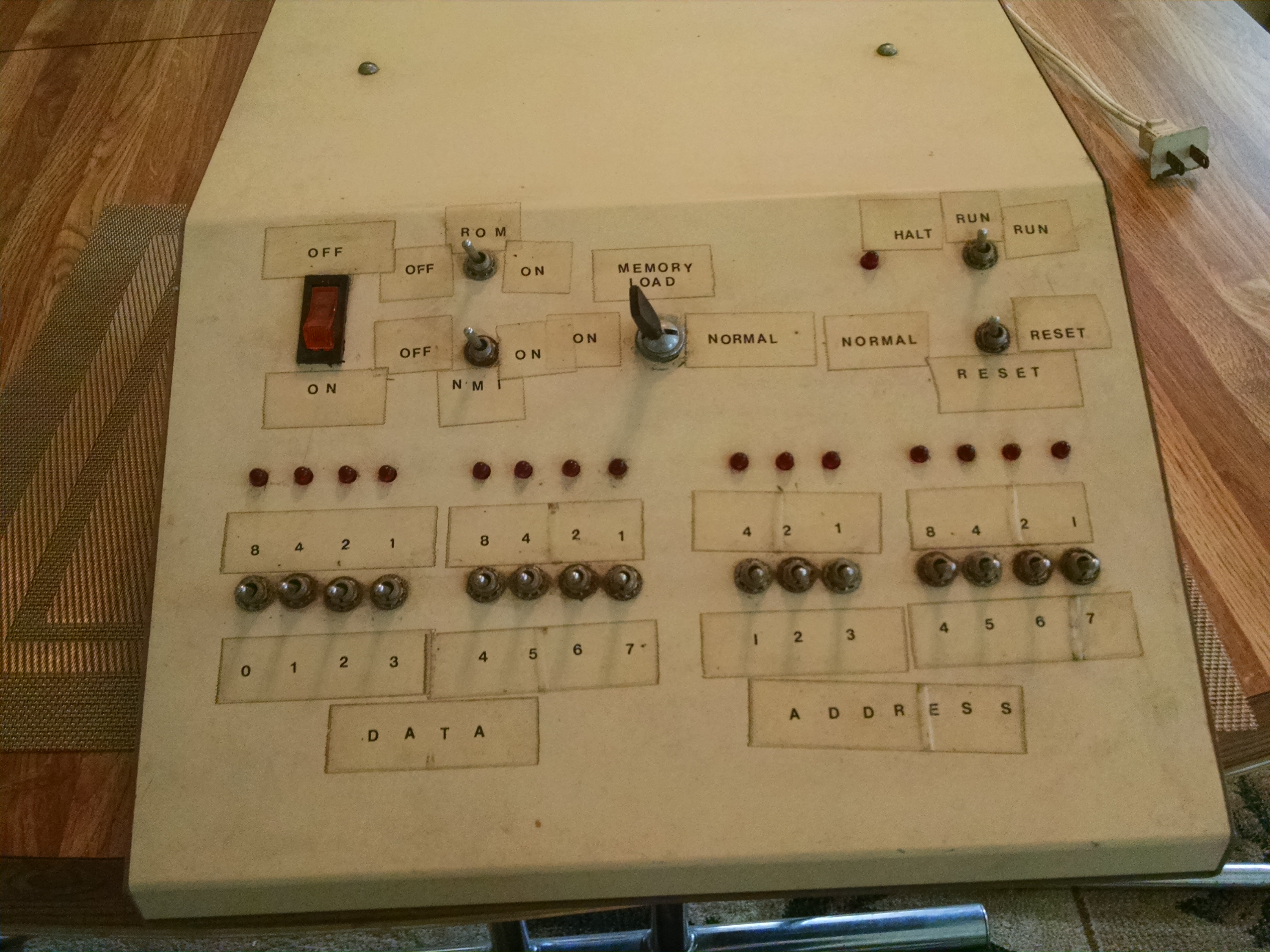 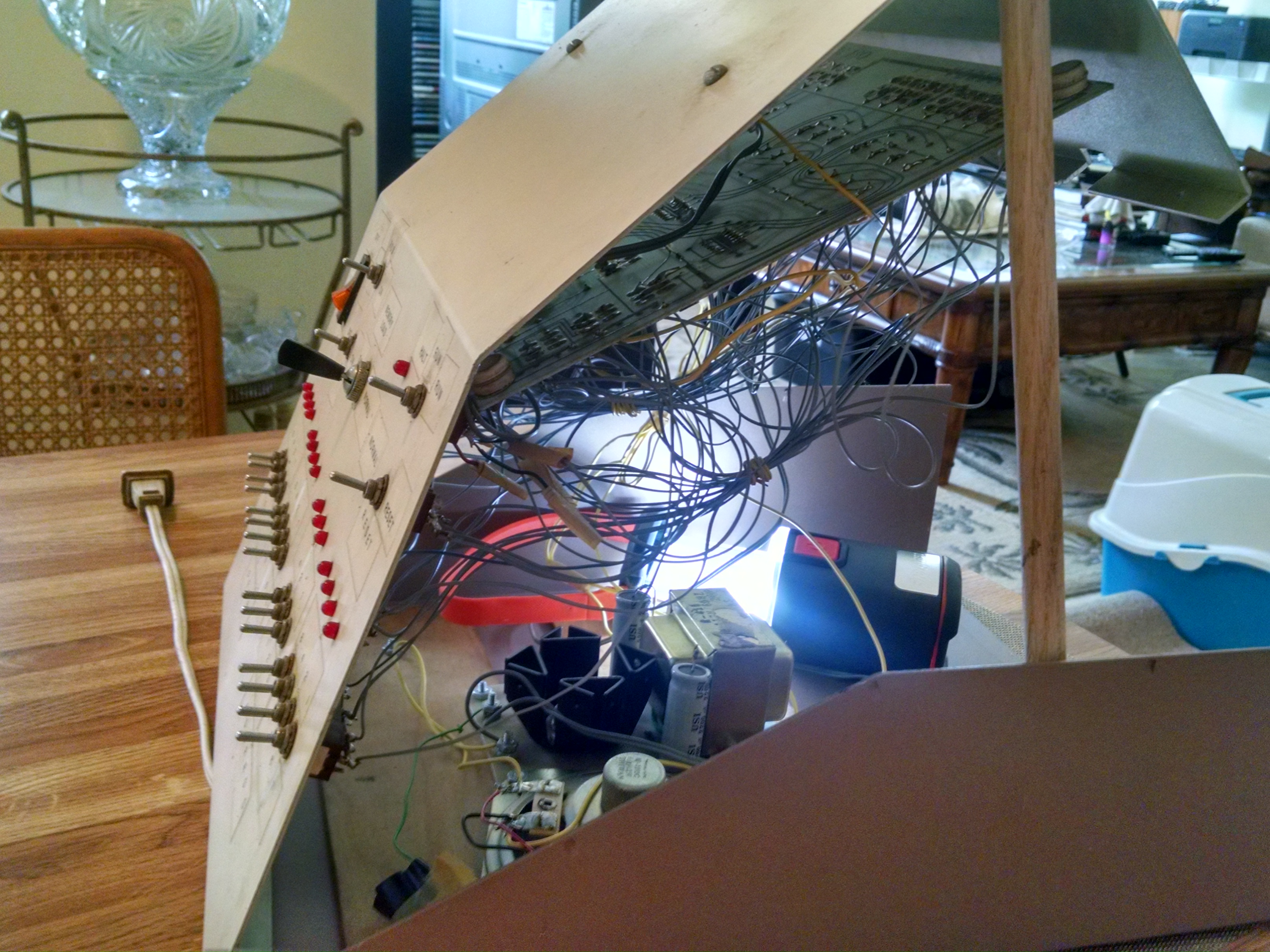 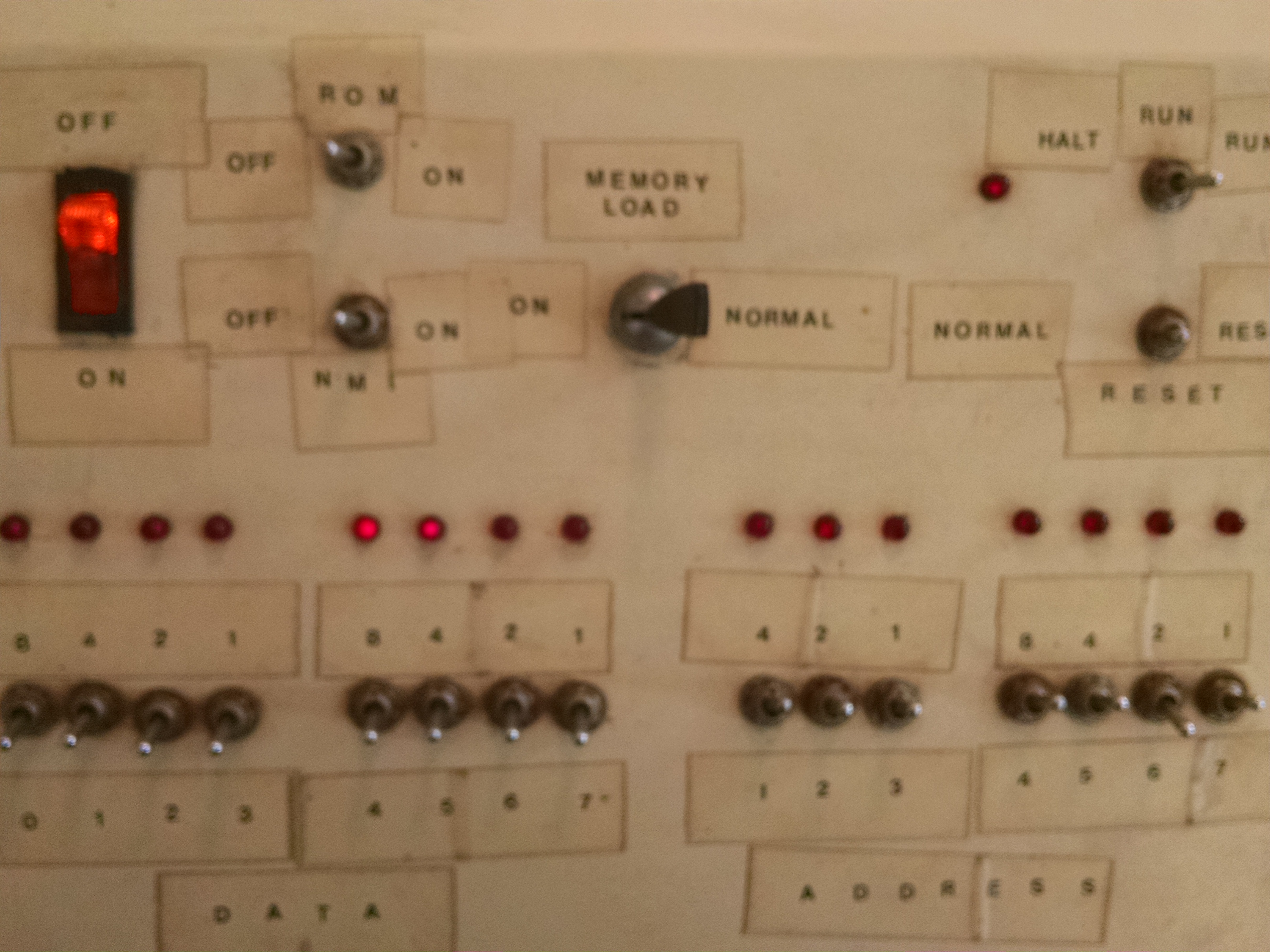 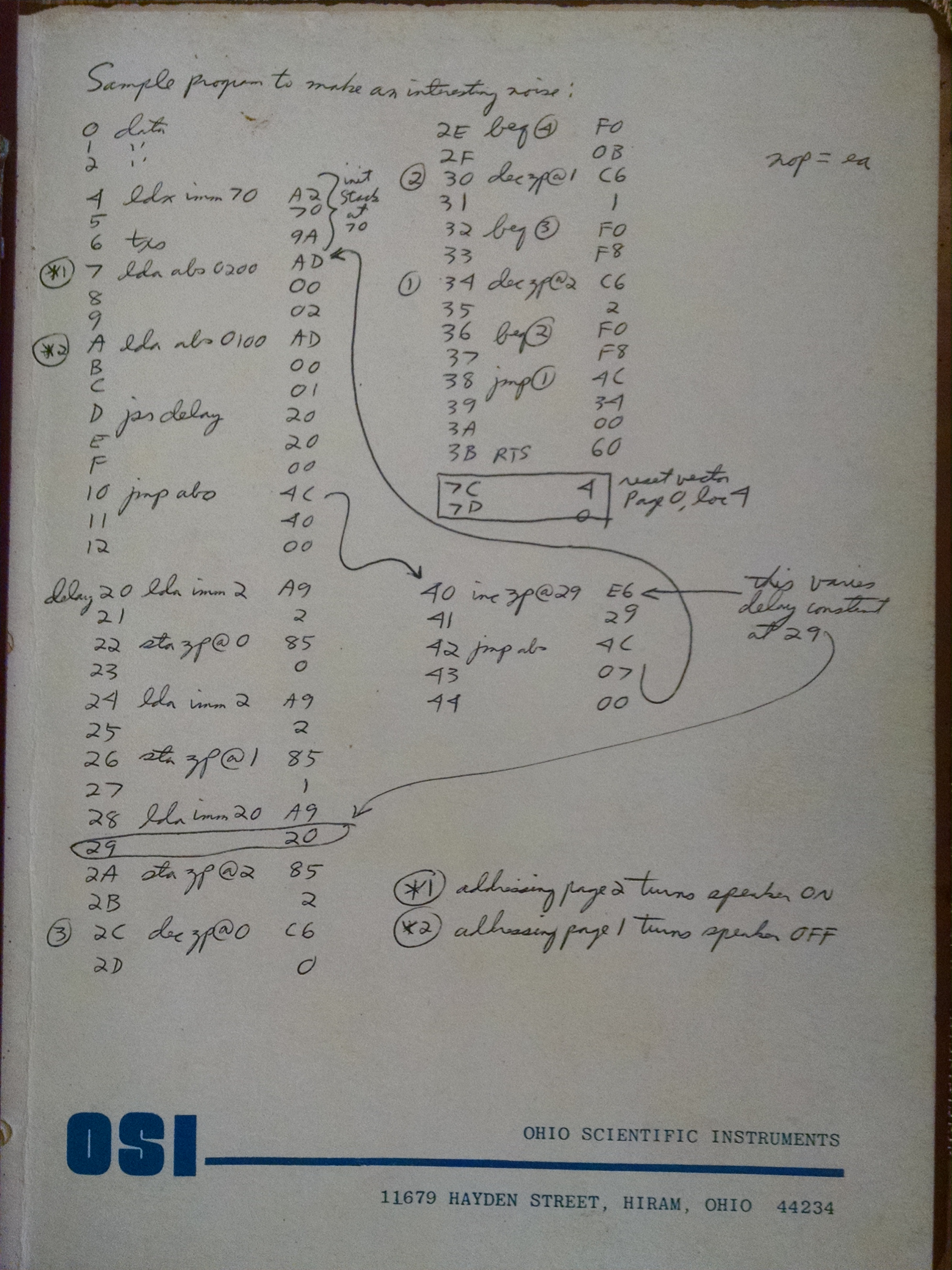 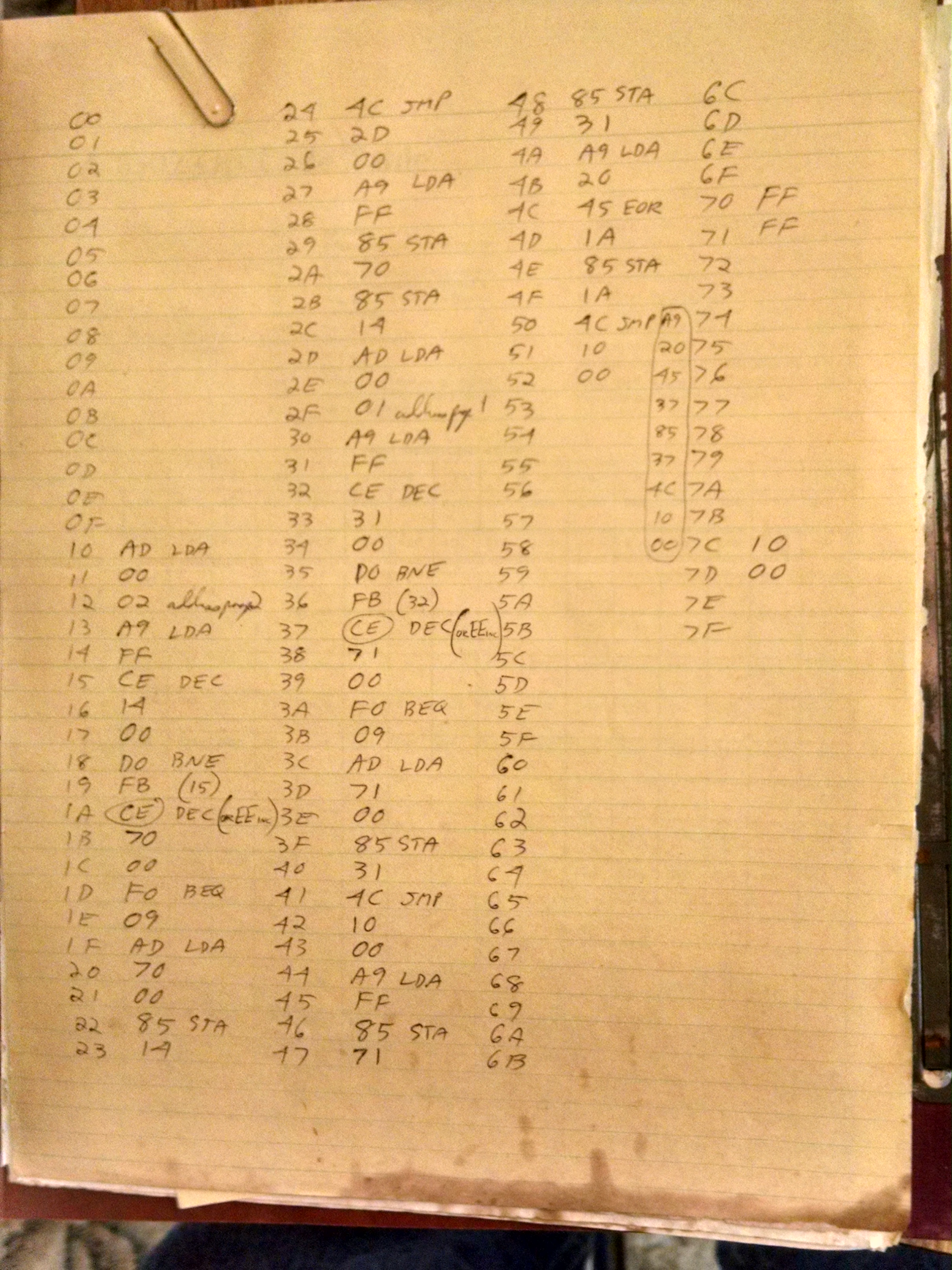